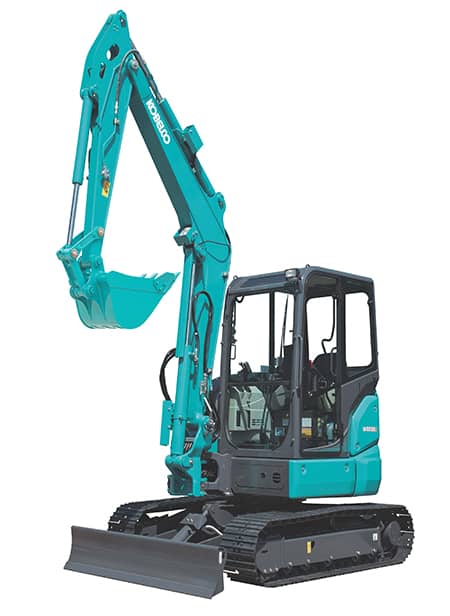 Kobelco continues to deliver a perfect mix of productivity and performance with the new SK55SRX-6 mini excavator, equipped with class-leading features.

The -6 model builds upon the popular SK55SRX that was introduced to Australia in April
Kobelco Australia General Manager, Sales and Service, Doug McQuinn said, “The original SK55SRX was well received from the start, with a large cab and high auxiliary flow that allowed high flow attachments to be used productively.”
“Now the SK55SRX-6 builds on that with a new S mode of operation for improved fuel economy and the Kobelco iNDr noise and dust reduction system – the first time that this has been seen on a mini excavator,” Doug explained.
The S mode setting on the SK55SRX-6 excavator reduces fuel consumption by 23 per cent compared to the high idle mode of its predecessor.
The iNDr system was initially developed by Kobelco for its recycling machines and was then introduced to the larger excavators in the Kobelco range. The SK55SRX-6 is the first Kobelco mini excavator to be fitted with this system.
In developing the iNDr system, Kobelco’s aim was to reduce noise levels to at least five decibels lower than the most demanding current standards. This is a substantial advance for mini excavators that often operate in an urban environment, where there is high sensitivity to noise and dust levels.
The approach taken to controlling noise levels was to have single air entry and exit points so that noise could be more readily controlled. However, the redesigned air flow system had a further benefit.
“The air intake is just inside the engine cover and protected by a filter that can be easily removed for cleaning,” Doug said. “This does away with the need to clean the radiator core and greatly simplifies routine maintenance of the cooling system.”
A new option for SK55SRX-6 excavator is a liquid crystal display (LCD) monitor for displaying maintenance and operational information (a rolling three-month history is retained).
While the economy, low noise levels and other refinements of the SK55SRX-6 will be widely appreciated, Kobelco introduced the SRX model in parallel to its SR zero tail swing model as a machine that had a very short tail swing but did not sacrifice performance to achieve this.
“The clever three-pump hydraulic system design gives high performance without compromising overall machine functionality,” said Doug.
“The two primary variable flow pumps handle travel and boom and digging functions while the smaller gear pump handles blade and swing functions. When it is not being used for swing, the flow is diverted to the digging arm circuit so that the full combined hydraulic flow of 133.6 litres per minute is available.”
Other signs that the SK55SRX-6 is bred to work are the traditional Kobelco undercarriage and boom strength and the attention to detail in protecting hoses, cylinders, lights and other potentially vulnerable areas from accidental damage.
As befitting a machine designed to work, the combination of factory-fitted auxiliary hydraulics to suit both one-way and two-way flow and a standard quick hitch means that as soon as a buyer commits to a machine, it is ready to work.
With a long history with the Kobelco brand, Doug summarises its values as, “Kobelco generally leads the excavator market with new features.
“However, it never loses sight of the fact that excavators, both large and small, are designed to work. The SK55SRX-6 might be compact, quiet and economical but it is also one heck of an excavator!”
Some dealers have already placed orders and the first machines will arrive in Australia in January 2014. Both the canopy and air conditioned cab variants will be available.
For more information please enquire online today by clicking here or call your nearest Kobelco dealer on 1300 562 352