Rhino Demolition with Kobelco and STM 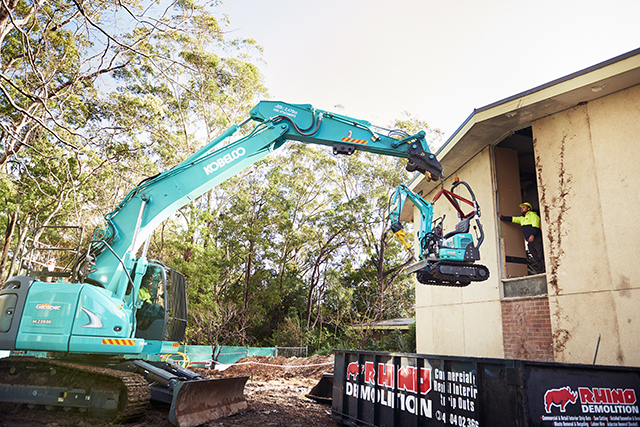 Stepping onsite at Kings School in North Parramatta there is a buzz of activity. There is a low lying early morning fog and the sun is coming up and shining rays of light in-between the trees that surround the worksite. There’s an almost magical feel as the Kobelco machine and their operators start moving around onsite. Even though it had poured with rain the day before, there is an obvious push forward by the crew from Rhino Demolition who aren’t letting the ankle-deep muddy conditions slow down either themselves or the half dozen Kobelco machines that are scattered around the site.

The team at Earthmoving Equipment Magazine met with the Project Manager of Rhino Demolition, Peter Kanak, at the Kings School site. Peter has 15 years of experience in all facets of demolition work and started with Rhino Demolition as a labourer a decade and a half ago. Peter moved over from Prague in the Czech Republic and his hard work, focus and determination saw him progress from labourer to truck driver, then making a move to the office, doing allocations and estimations. Now in 2018 Peter is back onsite as a project manager with a thorough understanding of all tasks and roles on site because at one stage or another he has spent a significant amount of time completing most aspects of the job.

Rhino Demolition has the resources and equipment to undertake pretty much any size project in the commercial, residential and industrial sectors throughout Australia. They specialise in structural demolition, detailed demolition, excavation, concrete cutting and rubbish removal. But it is through their business know-how of the management team combined with the energy and focus of well-trained project teams that combine to deliver on-time successful projects that are in accordance with OHS&E standards.

Peter and the rest of the Rhino team live and breathe the mutual business practices that owner of Rhino, Ryan Murphey, set up back in 2005. Values like mutual respect, teamwork, trustworthiness, flexibility and proactivity are all extremely high on the list of attributes amongst the team. Ryan and Peter firmly believe it is these traits that serve them well during tough economic times. Between Ryan, project manager Peter and the rest of the key operational team there is over 60 years of experience in building, demolition and strip-outs. An absolute wealth of hands on knowledge that can never be underestimated – an asset that is also passed down to the younger members of the team.

Rhino has maintained a strong relationship with Sydney Trucks & Machinery Centre (STM) and Kobelco over the last decade, in particular with STM’s Sydney Sales Rep, Adrian Martiniello. Adrian has been kicking some great goals with STM for four years now and has enjoyed his time helping Rhino and his other 300 odd Sydney-wide customers grow over this time. Adrian commented, “The main changes I’ve noticed over the last four years with STM is the large number of infrastructure projects and road projects that require compact radius machines becoming more prevalent in the market.” With a competitive industry Adrian believes great relationships with his clients is everything and it’s the little things they do behind the scenes that keep their customers coming back.

With over 10 Kobelco machines in their stable, ranging from the Kobelco SK008 up to the SK235, Rhino are obviously very happy with the relationship and have found the machines from Kobelco very suitable for their operations. This is due to their fantastic balance of power/performance, reliability, time-saving technologies and operator comfort, enthusiasm, confidence and speed behind the controls. The boys all enjoy operating the Kobelco’s because of the quality of the machine and comfort of the cabin and ergonomics of the controls. Speaking with Peter, it’s obvious the lads at Rhino have a fantastic relationship with Adrian and the team at STM. When asking Peter about STM, he replied full of enthusiasm, “I can’t fault the guys at STM; their after sales service and servicing has been exceptional. We basically never experience breakdowns and the very rare occasion something has had an issue the team at STM are onsite the same day to rectify any problem. There is no downtime, and we get to push on with our productivity and keep the machines moving. The guys at STM are an essential part of our team.

A big focus of Rhino is to reduce manual labour costs through the use of machinery, thus improving productivity on site. Here at Kings School, there are six Kobelco excavators alone. The scope of this job includes the refurbishment of many of the onsite accommodation buildings, which are being stripped to the bare bones and rebuilt.

Rhino has just purchased a new SK235SR machine that has proved to be a real hit amongst the operators. Its power is second to none and apart from the usual tasks of digging, hammering and excavating, the machine has proved to be very useful in lifting the smaller excavators (SK008 and SK17SR) up onto slabs for cleanouts etc. saving money straight away removing the need to engage cranes. The Rhino team is made up of about 50 people with about 25 being on site at Kings School and the other operators and machines spread across works at Sydney Opera House and Bexley Nursing home.

With Rhino’s commitment to safety and safe work practices, combined with solid work ethics and commitment to reliability, consistency, predictability and accountability it’s no wonder they are the first choice for many large premium quality clients and projects across Sydney.