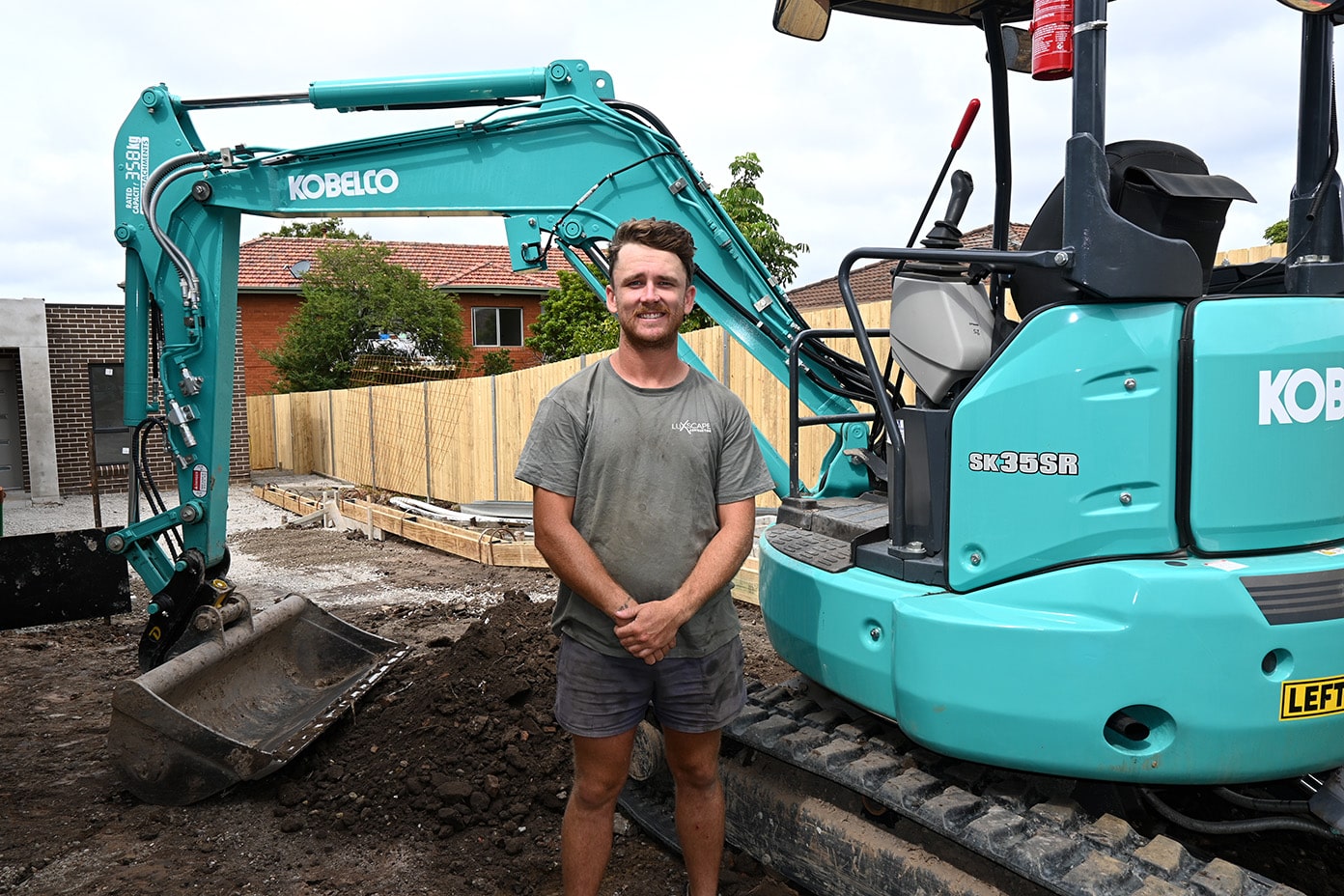 While a break in the persistent Sydney rain permitted, Luxscape Contracting owner, Sean Doherty and his team were out on site in Roselands, busy preparing for a new driveway to be laid. We met up with the guys to see how their Kobelco mini excavator was measuring up to the task at hand and how they came to purchase the new machine.

After an accident on a Sydney motorway that saw his old faithful written off, there was only one choice as a replacement excavator for Sean.

“I went out and bought a brand-new Kobelco SK35SR-6, the exact same model as the one that had been written off. I didn’t want anything else but that machine, so I had to go out and buy a new one to replace it,” says Sean.

Started in 2019, Luxscape has come a long way in a couple of short years. Now with a team and fleet of trucks behind him, the company will take any job that comes their way up and down the coast of NSW.

“We work mainly in concreting, digging out driveways, bulk excavations, that sort of thing, but really anything outside that we can do, we will do. Wherever the work is needed we will go, as long as we have the gear to do it,” commented Sean.

Prior to Luxscape, Sean had been working for the same company for over 10 years, where he went straight from high school and into learning the landscaping trade.

“I started out doing some holiday and weekend work and then got offered an apprenticeship. I had no intentions to leave school, but the opportunity just fell into my lap, which I couldn’t say no to, and I haven’t looked back,” Sean reminisces.

“After a decade in the same company, I decided to have a crack at going out on my own. I had always wanted to, to see if I could do it, and it seems to be going pretty good at the moment.”

Sean’s fondness of Kobelco started at his previous company, where he had a chance to sit in a variety of machines.

“I’ve been operating excavators for many years and 100%, hands down, the best machines I have ever operated are Kobelco, and those I talk to in the industry tend to agree. Compared to other machines, the smooth operability, and the power behind the Kobelco is just far superior. The size of the SK35SR is also perfect for what I do, it’s not too big and not too small, it’s just right. I’ve used smaller machines to do the same job and it just takes too long and I’ve used bigger machines, but on some of the more space limited sites, they just don’t work,” says Sean.

“The fuel efficiency of Kobelco machines is really good as well, I find I only have to fill up every couple of days, and with fuel prices as they are, any savings is good.”

Kobelco excavators are backed by an expert network of independently owned and operated dealers, offering exceptional customer sales and aftermarket support, which Sean has appreciated when making his purchase.

“We haven’t had any issues with our machine, it’s been pretty smooth sailing. We did have one hiccup with the quick hitch, but we got it back working quickly. We have had our first service, and it was an easy experience with our local dealer, Sydney Trucks and Machinery. Our sales guy, Christian, has also taken good care of us and we look forward to dealing with him again in the future. Actually, we may be in touch sooner than later about an SK008, for that more detailed work,” Sean adds.

A strong advocate for the Kobelco brand, Sean had this advice to give to anyone on the hunt for their next excavator.

“Even if it does cost you a bit more money than another machine, it is totally worth it. I know of several people who have purchased from another brand and they had instant regrets after sitting in my Kobelco. I’d be happy to recommend Kobelco to anyone.”