The ConExpo-ConAgg 2014 event was recently held in Las Vegas, Nevada from March 4th to March 8th with over 2,400 exhibitors and over 125,000 attendees.

Kobelco Construction Machinery Australia staff and dealers as well as Kobelco Group Companies world-wide attended this huge event to mark the brand’s participation as an independent brand for the first time in ten years.
Kobelco Construction Machinery USA (KCMU) had an expansive 3,219 square metres outdoor exhibit at ConExpo-ConAgg 2014 where a powerful line-up of excavators, plus new demolition machines and advanced Kobelco excavator technologies was unleashed.
There was plenty of excitement as KCMU’s booth featured a 6 metre tall inflatable beast which was designed using CAD files of a Kobelco SK350 excavator. During the show there was also an animated movie of “The Beast” which showed how tough Kobelco excavators are on jobsites. To add to this excitement, there was plenty of action at the Kobelco booth as ConExpo attendees had the chance to compete in the Beast Bowl interactive video game. This 3D Kinect Style video game allowed two players to play at a time and test out their athletic skills by throwing steel footballs into various sized construction pipes to earn points. Each day the leader board displayed the names of the top scorers with the top three winners earning prizes.
In addition to such a memorable exhibit, there was also a Kobelco SK350 excavator wrapped to honour U.S military that was on display. This limited edition crawler excavator was designed to support U.S troops and KCMU donated $100,000 to the non-profit organisation Wounded Warrior Project™ (WWP) from the sale of 5 of these Kobelco SK350 excavators. 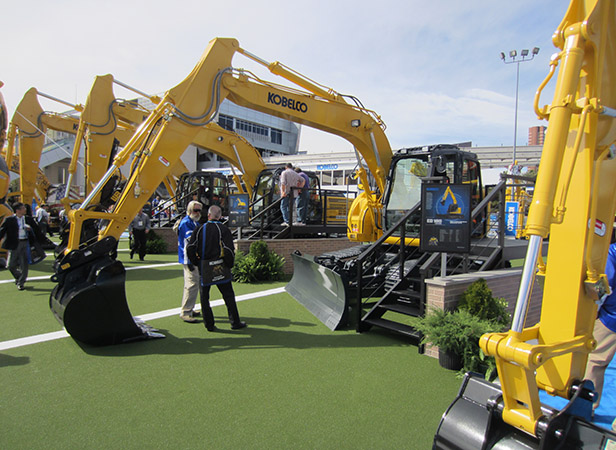 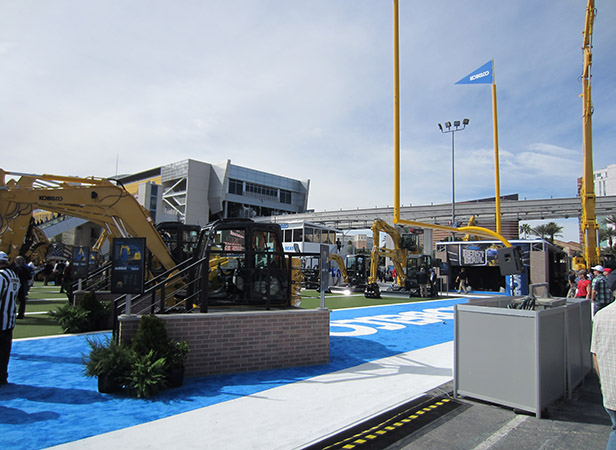