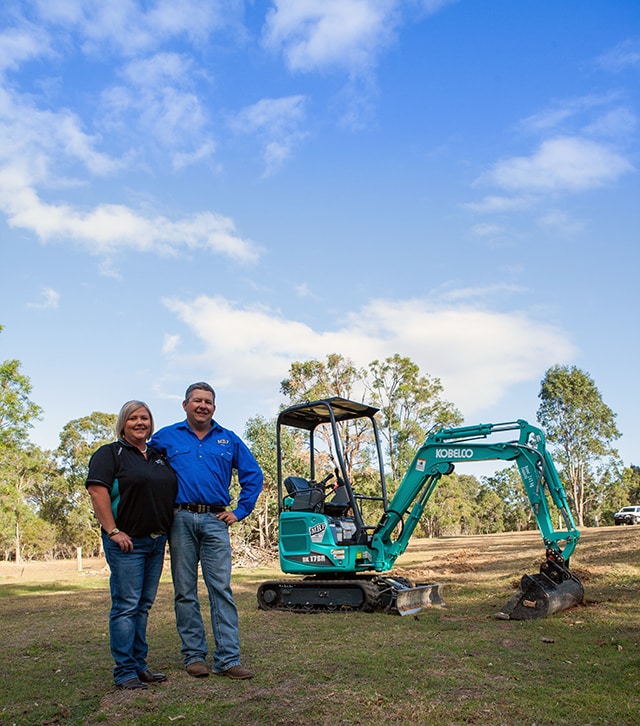 When Rebecca and Matt Price were looking for the new mini excavator that would kick them off on their new dry-hire business venture, MRP Hire, they expected their chief considerations to be price and quality. But as well as purchasing a quality machine, it was the exceptional level of customer care they received that influenced their decision to buy a new mini Kobelco excavator.

Rebecca and Matt had been building their own house in the New South Wales Hunter Valley but were disappointed to find that the mini excavators they had been hiring to do levelling and retaining wall jobs weren’t reliable and weren’t performing to capacity. Moreover, as there was such huge demand for machines in the area, they were hard to get on site in the first instance. So, wandering around the 2017 Tocal Field Days, Rebecca was excited.

“We were starting something together, and we had an idea of how much we were willing to spend and the size of excavator we were looking for, but we weren’t really sure what we could expect to get for our money in terms of quality. So, we went to the field days to get a hands-on idea of what was out there,” Rebecca says.

Venturing over to the Gato Sales site, Rebecca says she was immediately impressed with the level of attention and care she and Matt received while perusing Gato’s Kobelco excavators on display. They were interested in Kobelco’s SK17SR mini excavator.

“We went to several sites at the field day, and we looked at heaps of machines, just like everyone else there that day. The other vendors, for the most part, weren’t that interested in us. The difference when we got to the Gato site was amazing – we were met and treated well from the get-go,” Rebecca says.

Chad Vadnjal is the owner of Gato Sales & Repairs, based in Newcastle, and the Kobelco dealer for the Hunter Valley, Central Coast and Mid-North Coast of NSW, and assisted the Prices in understanding the different options available on the market.

“Kobelco machines are that distinctive teal blue, so we had noticed them around, but we hadn’t really investigated them seriously before we met Chad and the Gato team,” Rebecca says.

After the field days, Rebecca and Matt had some quotes and follow ups come through from different dealers for different machines, but Rebecca says that in making her decision with Matt, quality service and quality product prevailed.

“Matt looked at the technical elements of all the machines and he was happy with the Kobelco excavator. He was happy that it would perform well for us and I was happy that Matt would get the after-sales support we might need from Chad, Marty Cook and the entire Gato team while getting our business established. These ended up being the biggest factors in purchasing our first mini excavator.”

Rebecca says their business is now going so well, that Matt is now preparing to transition from his current employment as an operator on a mine site to working in their new business full-time.

“The Kobelco is so easy to use and operate, and we’ve had a really great response from people hiring it, so we are looking, in the near future, to add some more to our fleet.”