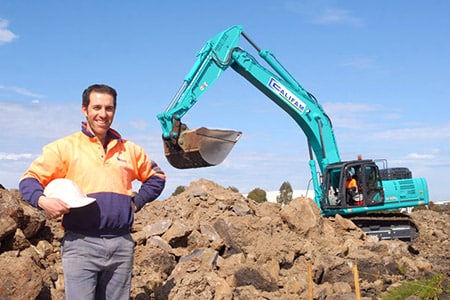 “Kobelco machinery has been the backbone of our company’s fleet for many years,” says Califam Constructions Managing Director Anthony Caligiuri.

“In general they are a very strong machine and are great on fuel consumption. Plus they can handle bigger rock breakers really well compared to other machines in the same class.”

Califam Constructions was formed 40 years ago by Michael Caligiuri and is today operated by his five sons, Anthony, Joe, John-Paul, Andrew and Luke.

The company specialises in earthmoving and civil construction related to building main pipelines. It has undertaken many significant projects for major developers and water authorities in and around the greater Melbourne area.

“We pride ourselves on our state-of-the-art plant and technologies and our ability to deliver projects on time and to budget. Having the best machines is part of maintaining that productivity” says Anthony.

“We’ve had a number of SK480LC-8s before, and we still do. They perform well against competitive models but we knew that the new SK500LC-9 would perform better than the previous model so decided to give the 50-tonne SK500LC-9 a try.”

“The reduced fuel consumption was a major factor in our decision but it also runs at a good speed when compared to other machines in its class. Its track speed is good too so it’s the complete package” says Anthony.

Safety is also a big consideration for Califam as they use the excavator for deep trenching in hard rock with a rock breaker attachment.

The operating weight of the SK500LC-9 is almost 50,000kg which is significantly heavier than earlier models and the cab also has rollover protection and is certified up to 56,000kg to cater for large attachments.

“We’ve also had very good feedback from the operator. The cab is very comfortable and has good visibility. It has a reversing camera, which also adds to safety and these features make it much easier to sit in it all day” says Anthony. 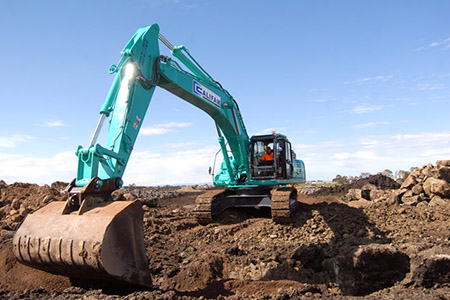