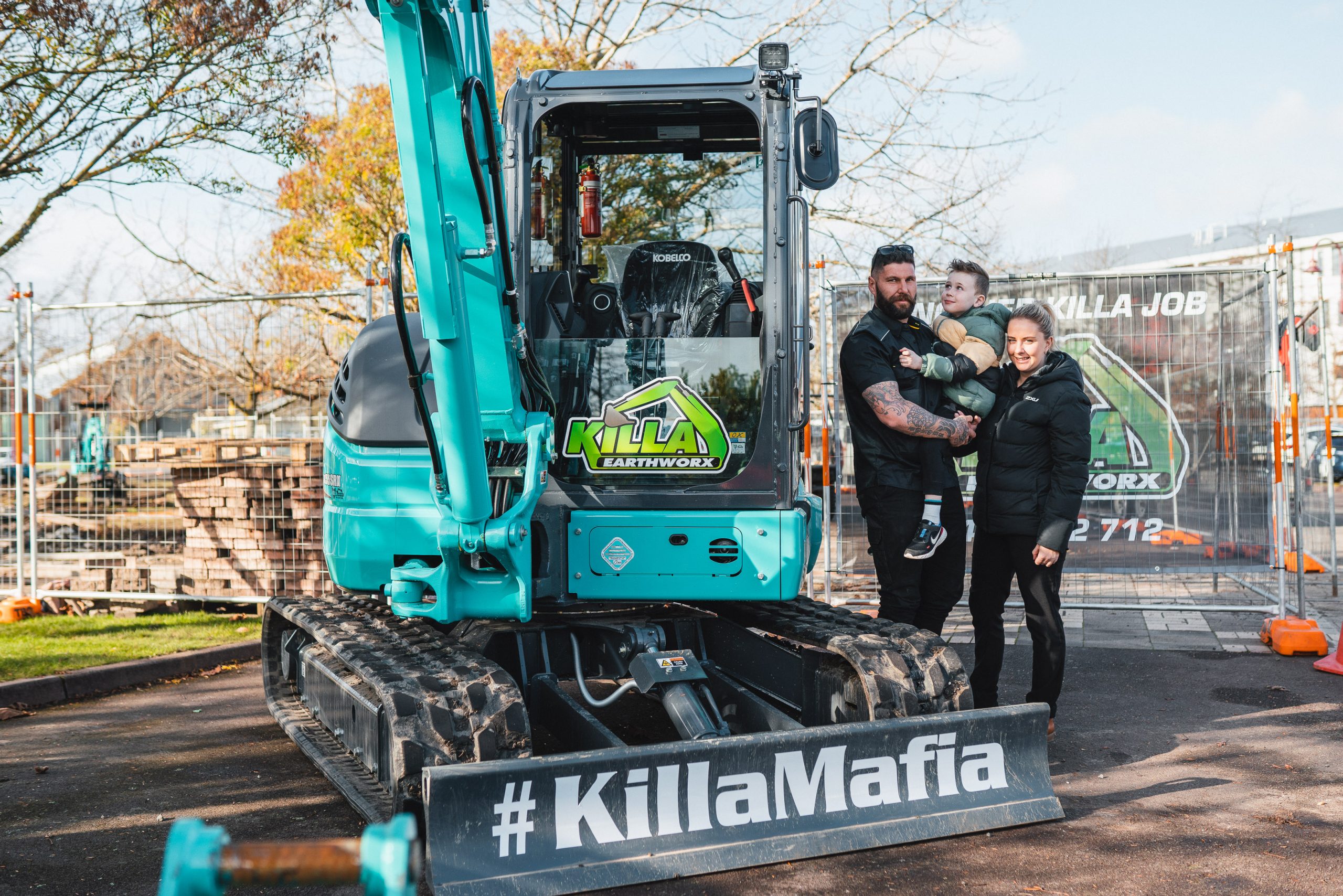 Excavating and earthmoving contractor KILLA Earthworx has in the space of a little more than  five years grown from a one-machine operation to maintaining a growing fleet of equipment,  with the Tasmanian company building its business by putting in the hard yards, taking a personalised approach and prioritising client relationships.

Having established KILLA Earthworx in 2015 – initially starting out with a second-hand 3t excavator and a 1987 Hino truck – Owner Mat Crawford has since overseen the Launceston-based business’s steady expansion and strengthening of its capabilities.

Mat himself had come from a background in concreting, before moving into the earthmoving industry, pursuing his interest in working with machinery – and, having set about honing his skills and learning as much as he could, it wasn’t long before he made the decision to start out on his own.

“When I started KILLA, it was mostly focused on the concrete sector, mainly working lots of dig-outs, and then I eventually ended up getting a communications contract with Telstra,” Mat told EEM.

“I also began working in the power sector with a local company, continuing to work on infrastructure projects, before moving back into building, and that has been the focus for the last couple of years.”

As it stands, KILLA now encompasses a staff of 12, along with a fleet of seven excavators, with Mat stating that the business is currently being kept busy across a variety of projects in the building sector.

“We’ve got four full-time building companies that we do dig-outs for, and we do a lot of house cuts for residential projects,” he commented. “And we’re now also starting to expand, moving into bigger warehouses and doing work for commercial projects.”

Mat told EEM that he takes a personal  approach when it comes to tackling projects of all sizes, and stressed the importance of keeping clients involved and up to date as works progress, stating that he and his staff treat every job as if it’s their own.

In characterising his work outlook, he pointed to the importance of fostering strong client relationships, and described an underlying attitude at KILLA of being, “don’t walk away from a job unless you’re happy with it at your own house”.

“I like that my blokes take pride in their work, pay a lot of attention to detail and do not leave a site until they are 100 percent happy,” he commented. “And we know that if they’re happy, then the clients will be happy.

“We’re a really tight bunch of blokes, and everyone works well together. All the blokes are really approachable, they’re all friendly, and we’re all about good attitudes and giving the customer exactly what they want.”

Meeting client expectations is, of course, made significantly easier when working with robust and reliable equipment, and Mat has over the years steadily built his fleet of excavators.

Mat told EEM that he had no hesitation in using Kobelco machines from the get-go, having previously had positive experiences with the Kobelco excavator range.

“The company that I used to work for, the owner is a Kobelco man, and I have just never got off one since,” he said. “They’re incredible machines. Every single machine I own and have ever owned is a Kobelco.”

KILLA has recently added the Kobelco SK55SRX-7 compact excavator to its fleet – the first SK55SRX-7 model to be deployed in Tasmania – with Mat stating that it has slotted seamlessly into the company’s operations.

Given his previous experience with Kobelco machines, Mat had strong expectations ahead of taking delivery of the SK55SRX-7, telling EEM that, bolstered by a range of operator-friendly features, it “complements everything we’ve got”.

Indeed, with KILLA also running an SK55SRX-6, Mat is in a good position to compare, pointing not only to an upgrade in performance, but also highlighting several new features designed to make operation easier.

“It’s like Kobelco has actually listened to a bunch of operators,” he said. “For instance, they’ve now got double windows – before it was just one window, and it was difficult if you had to look out while you were loading something.

“There’s extra lights, there’s more room in the cab, behind the seat there’s a little notch where you can take your front window out, and it all locks away and everything’s safe. It is the most operator-friendly machine that I’ve ever used.”

Mat added that the fuel economy “is incredible” – while, along with the performance benefits provided by the SK55SRX-7, features like Bluetooth and a touchscreen display enhance the overall operating experience.

In fact, he noted that the latest addition to KILLA’s fleet has been in high demand since its arrival, with staff members lining up to get behind the controls.

“They all want to get in it, and take pride in the machine,” Mat commented. “They all go to extra lengths to make sure it’s washed and cleaned, and it just highlights all of what Kobelco essentially is.”

Kobelco dealer DLM Machinery has been taking care of KILLA’s equipment needs over the past five-plus years, with DLM Company Director Dave Morrison telling EEM that the SK55SRX-7’s range of features combine to deliver an enhanced operating experience.

“They’ve focused a lot on the operator comfort, and they’ve also increased the digging power and the operability of it,” he said. “Operators are raving over how smooth they are and how much power they’ve got compared to the previous model.”

Dave and his wife Leanne started DLM in 1995, becoming a Kobelco dealer in 2000, with the family-owned business operating out of its workshop facilities in Launceston, providing customers a comprehensive range of services, including maintenance and repairs.

“We’ve built the business on reliability, good service and good backup,” Dave explained. “My phone is on 24/7 and everyone knows that.”

Mat said that DLM has been there every step of the way, providing a level of service that “is second to none”.

“My relationship with Dave is magnificent,” he said. “The sales process is hassle-free. I ring up Dave and tell him what I want, and he tells me the price and the date when I can have it, and that is as far as it goes. It’s that simple.

“They service all my machines, and if I need information about the machinery, they’ll answer all my questions, while if I need any parts, it’s only a couple of days turnaround. The follow-up service is A1.”

Mat told EEM that he hasn’t looked back since starting KILLA, highlighting both the freedom that comes with owning his own company, and the opportunity it has provided to build it as a family-owned-and-operated business.

In line with this, Mat’s father has taken an active role in the business, and his children regularly come into work with him on the weekends.

“For me, it’s all about making it a personal company,” he said. “We’re all friends, and realistically, if you’re going to spend this much time with a bunch of people, I’m glad that it’s a nice, friendly family-based company.”

Building on this foundation, Mat is optimistic about the future – and, while the COVID-19 pandemic has created uncertainty in recent times, he said that the business has remained strong.

“As it sits now, we’re essentially booked out to Christmas, and we’re looking at booking in next year’s projects already,” he said. “The building sector here is going through the roof, and it’s a great time to be a part of earthmoving.”

Dave also noted that it has been a busy year for DLM, with positive signs moving forward into 2022.

“We’ve had strong sales all year, and they’re continuing to go through to the end of the year that we know of,” he commented. “I believe 90 percent of our customers are still busy for this year and booking work into next year. Our industry in Tassie is thriving quite well.”