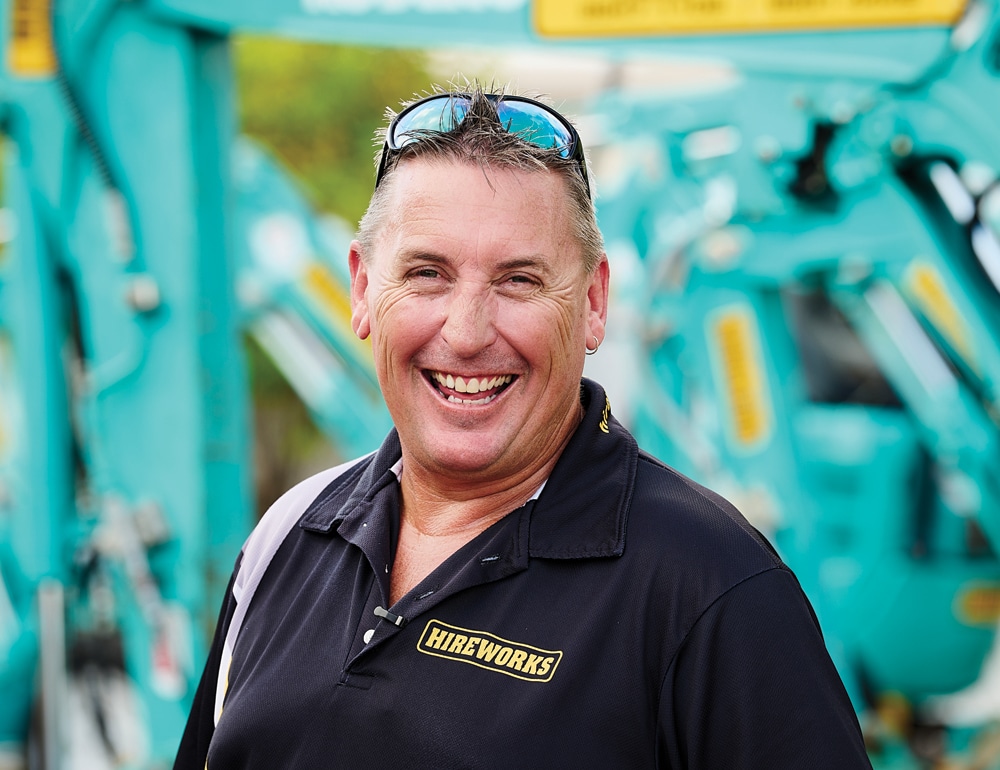 Northern Territory hire company Hireworks has two separate locations based in Winnellie and Palmerston. The company supply a large range of general hire equipment and servicing, targeting the mining, civil construction, trades, events and DIY sectors. Hireworks exclusively provide Kobelco excavators to their clientele due to their reliability, performance and efficiency.

Allan Gillett is the Managing Director of Hireworks and has been in the hire industry in Darwin for over 20 years. EEM recently had the chance to visit Darwin and in particular catch up with Allan and his team. When I chatted with Allan about his history with Hireworks, he shared “I have been involved in Hireworks since November 2016, after being approached by the original owner, Richard Palmer. Hireworks had been established for 5.5 years prior to me starting. At the same time Richard got two other people involved, Dave Pettman and Eddy Bagley. There was an acquisition of another hire company ‘Go Hire’ at the same time, which provided challenges having all different types of equipment, especially excavators. So we set a plan to standardise our equipment – all the same make and model where possible across various sizes. In the end it was Kobelco’s 4-year warranty and reliability that sent us down our path with Kobelco… and the rest is history.”

Staff retention is always a great indication of a good business. The fact that the majority of Hireworks’ 10 staff have all been onboard for three to five years speaks volumes about Allan and his team. “We have a great retention rate in a labour market shortage. Our mechanics enjoy working on the newer machines and we are always adding new equipment to our fleet. We send equipment all over the Territory, including remote communities as far as Gove to the east, Alice Springs to the south and Kununurra to the west,” said Allan.

Hireworks is very uniquely placed just two doors down the road from Kobelco dealer Forecast Machinery, run by Tom Bate. Forecast Machinery has supplied Allan with his 21 Kobelco machines over the last eight years. Allan spoke about his relationship with Forecast, “I have been working with Forecast Machinery for about 8 years, including in my previous role for repairs on other machines. When I started with Hireworks, Tom had not long taken over the Kobelco dealership. It’s been very handy for us having Forecast two doors away from our Palmerston Depot. Tom and his team are always helpful and carry most stock on hand like service kits, GET, attachments and tracks, which is great for us because turnaround time on machines is paramount. I have bought a few machines from Tom because he had them in stock, which is a great help.  Even just a few weeks back, Tom came in after hours on a weekend to solve a problem for one of our customers. You just don’t get that level of service often these days.”

Allan continued, “We have now just purchased our 21st Kobelco Excavator and they range from 1.7 to 5 tonnes. I originally chose Kobelco because of their 4-year warranty, but I’m happy to say I have never had to use it so far, which tells you a bit about the quality of the product itself, especially in the hire industry. The air conditioning units are a lot easier to keep clean in Kobelco machines compared to other makes of machines, which is very important in the NT.”

Having all Kobelco machines has now saved Hireworks a lot of headaches with attachments due to the standardisation that is possible from committing to the Kobelco brand. It is something that wasn’t possible when operating a hire company with four different brands of excavators.

While in Darwin I had the opportunity to visit Tom and his Forecast Machinery team to find out more about their relationship with Hireworks. “We’re a small team that has been running up here in the Northern Territory for the last eight years, supplying and servicing the hire and civil industries with Kobelco equipment (amongst others) in these remote areas of the Northern Territory. There are six of us in the Forecast team, including my wife Andy, and we are covering industries ranging from plumbing, concreting, hire companies and landscapers. We are supporting Allan and his Hireworks team with their range of Kobelco excavators and the attachments that go with them.

Our goal is to provide them the support they need to exceed their customer expectations, by providing top-shelf machines and the attachments required to complete a wide range of specific tasks. It’s generally been the reliability, efficient running costs, performance and power that always seems to be the feedback we receive from Allan and his customers about his Kobelco machines.”

There’s a lot of work and infrastructure projects on the go in and around Darwin over the next five years or so, and if any environment is going to test the design and quality of any machine it would be the heat and humidity of the Northern Territory.  It’s impressive to see the Kobelco excavator range perform so well in such testing and challenging conditions.

The Forecast Machinery team are well positioned to build the Kobelco brand in the Northern Territory as more operators and businesses like Allan and Hireworks tune into the reliability and performance of Kobelco’s range in challenging environments.