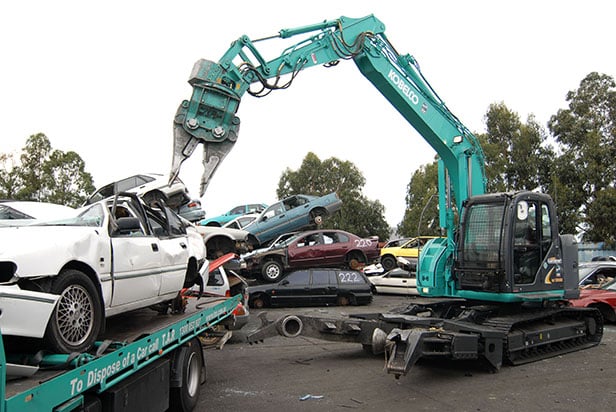 A routine visit to Japan more than two decades ago has literally changed the way Mike Third, owner of Total Auto Recyclers in Dandenong, Victoria, runs his business. It was on that trip to Japan that Mike first saw Kobelco’s Multi-Dismantling machine take an entire car apart in just minutes.

“I saw the possibilities immediately,” said Mike. “It looked like a dinosaur eating its prey, but I knew it actually represented the future of my business. Dismantling a whole car in a matter of minutes – and using just one person, the operator – was a revolutionary idea. I had to have one!”

The Kobelco Multi-Dismantling machine, first developed in Japan in 1979, allows auto recyclers to separate the recyclable materials quickly and easily. It separates the copper from the steel, makes light work of removing harnesses and is, according to Mike, twice as fast as four people dismantling a car by hand.

“The machine does, indeed, look like a giant bird of prey as it devours its kill,” said Kobelco Australia’s Brand Leader, Doug McQuinn. “The clamp arms hold the car in place while the nibbler – which rotates 360 degrees – grips each part in turn and pulls it away from the vehicle. The machine has the strength to pull the body apart and the finesse to remove tricky, small engine components.”

Although Kobelco had sold more than 1,000 Multi-Dismantling machines In Japan since 1979, the machine was not yet available in Australia. Mike set about acquiring a second hand unit from Japan, but very few came on the market. Then the new version of the Multi-Dismantling Machine was released in 2006 with an important new feature. The clamp arms could now move laterally as well as up and down, giving even more control and accuracy. As well as stabilising objects for dismantling, the clamp arms could now ensure a tighter grip for cutting, while the bowl-shaped grips and cutting teeth fulfilled a wide range of functions during the dismantling process.

“I knew the machines must be as good as I thought, because the people who already had them in Japan never seemed to want to sell them!” said Mike. “When the new ones came out, the stakes changed. I had to have a brand new one, mainly because of the new clamp arms. I renewed my efforts to get hold of a machine, but customers in Japan were waiting up to nine months for their new machines, so I knew my chances were slim.”

Mike persisted and, in October 2009, became the first Australian customer to take delivery of a Multi-Dismantling machine.

“I was one of the first two customers outside Japan to get one of these beauties and, to me, it was better than taking delivery of a new Ferrari,” he said.

Mike’s new unit is a Kobelco SK135SRD. Based on the 13 tonne excavator platform, this machine is ideal for complex work  like loom removal and engine dismantling. The larger 20 tonne Kobelco SK200-8 model is  stronger, making it ideal for dismantling light trucks as well as cars.

“The nibblers and clamp arms are the result of more than three decades’ experience by Kobelco Japan in dismantling cars, engines and other household goods,” explained Doug. “Learning to operate the machines is a relatively quick and easy process and, once an operator is confident on the controls, the nibblers and clamp arms become an extension of the operator’s own body. It’s this intuitive ease of use that helps make the dismantling process so fast and effective.”

Mike agrees, saying the most important quality he looks for in an operator is an understanding of the overall dismantling process.

“When the operator has basic dismantling knowledge, they can learn to operate the machine very quickly. Once they become confident, the machine is delicate enough to pick a teacup off the ground without breaking it,” he said. “The process becomes second nature, and that’s when you see real efficiency gains. Being able to eliminate the labour costs for at least three people is a huge saving for my business. Just as importantly, using the machine with one operator is actually much safer than dismantling cars by hand.”

The machine has a large, comfortable cab that offers outstanding all-around visibility and is also heavily protected, not just from rolling over but from flying or falling debris. The short rear swing specification means the rear corner of the upper frame doesn’t project beyond the crawler width, making it ideal for working safely in confined spaces.

Before purchasing his machine, Mike travelled to Japan as a guest of Kobelco to visit the Hiroshima production plant.

“It was amazing to see where these giants are put together. I didn’t need much convincing by then, but I could see how quality control and attention to detail was paramount,” said Mike. “We also attended the biannual Car Dismantling Competition, where we saw the best of Japan’s Multi-Dismantling Machine operators compete for the honour of being number one. They dismantled a car and separated all the materials in just 10 minutes. It takes us closer to half an hour, but that’s still more than twice as fast as we could do it without the machine.”

Mike believes the demand for these machines has only just begun and their availability in Australia is likely to change the industry forever.

“The global push for more efficient recycling will help drive demand for these machines worldwide,” said Mike. “I may have been the first Australian customer, but I’m no longer alone. Already three other machines have been delivered into the Australian market. Corio Wreckers in Geelong and Pick N Pay Less in Sydney have both purchased SK135SRD machines and Imlach’s in Melbourne has just taken delivery of one SK200-8 machine. I think the industry will take a huge step forward thanks to these machines.”