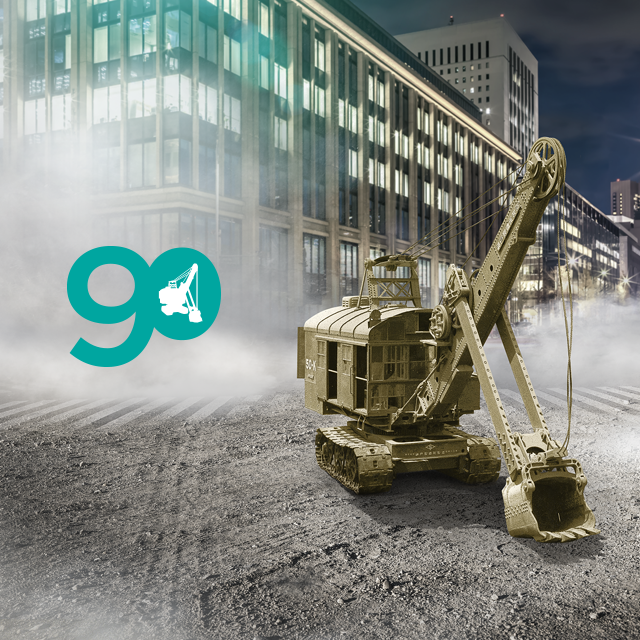 We developed the first Japan-manufactured power shovel in 1930.
This development started Kobelco’s history of taking on new challenges.
From that day forward, we have listened to the needs of our customers, pursuing new ways to respond to their needs with new technologies.
Based on the needs of users in the field, Kobelco remains committed to meeting each new challenge in the future.

Our strong motivation for developing Japanese technologies led to success.

The ﬁrst 50K electric shovel in Japan was developed in 1930. A series of society-wide disasters such as the stock markets crash and the Great Kanto earthquake put Kobe Steel’s business in a critical condition. Meanwhile, the electric shovel was developed for the operation in the Fushun coal mines of China, creating urgency to reconstruct the company. However, electric shovels made in the United States had already been operating at the mines. It was not easy to persuade management to replace these with shovels made by Kobe Steel, who at the time had no experience in manufacturing construction machinery. But Kobe Steel was highly motivated to develop Japanese technologies that were not dependent on foreign countries, and they succeeded in winning a contract for one sample machine.

Through trial and error, the historic ﬁrst construction machinery was manufactured.

There were many challenges that Kobelco faced and it took a whole year to ﬁnish the design, allowing for the parts manufacturing commence. Even at the time when processing and welding technologies were not very advanced, through trial and error and by developing various techniques, Kobe Steel was able to produce the ﬁnished sample machine. In the spring of 1930, the shovel was delivered to the Fushun coal mine. Three months after the start of trial operation, the customer highly praised the machine and told them that the shovel operated extremely well considering it was their ﬁrst manufacturing attempt. Thus, the development of this ﬁrst shovel was a resounding success, marking an important milestone in the history of construction machinery in Japan.

The start of our history of “taking on challenges”.

Soon after the success of the 50K, Kobe Steel took on the challenge of developing a larger model in 1934, the 200K. This was a super-large model with speciﬁcations unthinkable for the equipment of the time, including a machine weight of 350 tons, bucket capacity of 4 m³, maximum digging height of 21 m, and maximum digging radius of 25 m. As above, the history of domestic construction machinery in Japan started with the 50K and 200K, which is now the origin of Kobelco’s excavators and cranes.