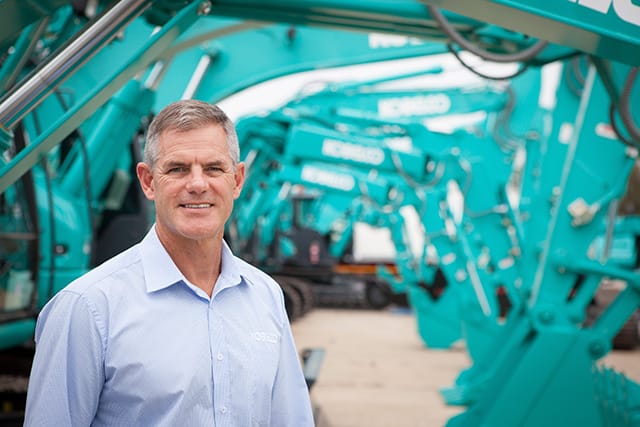 For a brand that operates on the strength of its independent dealer network, Kobelco Construction Machinery Australia punches well above its weight.

Kobelco sits in the leading three brands for Australian construction excavator sales with retail sales of Kobelco excavators during 2017 reaching over 1,000 units across Australia and New Zealand. This is significant for a construction machinery brand that exclusively specialises in excavators.

In July 2017, Kobelco welcomed new Managing Director Paul Torrington. Torrington says that the value of the brand’s approach of staying true to the independent dealer network model cannot be understated.

“At the end of the day, people trust independent dealers. People that purchase construction equipment find Kobelco machines through their genuinely strong relationships with those dealers.

“In themselves, Kobelco excavators are known for being reliable, fuel efficient and productive machines, but it is the excellent customer support delivered through our dealer network that makes the difference,” says Torrington.

On the back of its successful 2017 sales year, Torrington says Kobelco has a lot to look forward to as Australia’s economy transitions out of the mining infrastructure boom and into a new decade of civil infrastructure development.

“Looking at the forecasts and considering all the projects across the nation that already have slated funding, it’s going to be an exciting time for Australian construction,” Torrington says.

Through to 2023, statistics show that the eastern states will undergo an important growth period. Major transport projects, such as the inland rail project from Queensland to Victoria, are starting in 2018, as well as the Badgerys Creek airport and infrastructure project in western Sydney. Further, recent ABS data shows that in the decade to 2016, 50% of Australia’s population growth was in Brisbane, Melbourne and Sydney, and as the population in eastern capitals continues to increase, so too do new road developments in the eastern capitals.

“These new appointments are well positioned to support the growth in Queensland. Both have strong customer relationships and are reputed for their service and support capability, which is important – reliability of the machines aside, when you are part of a big project, you need to know you have reliable technical backup,” Torrington says.

“Since Kobelco has strong dealer presence in all the Australian capitals, we are particularly well positioned to support the boost in infrastructure projects.”

Outside of the eastern seaboard, projects such as Perth’s $1.34 billion MetroNet rail development over the coming four years and Adelaide’s $885 million Northern Connector are underway. Meanwhile, Tasmanian construction continues to experience high activity levels which are expected to be worth approximately $2.5 billion a year for at least the next two years.

“All of these initiatives create a lot of activity to supplement the work being done regionally in those states and open up new opportunities for our dealers and their customers. It’s a great time for the industry in Australia,” says Torrington.

Infrastructure projects are a helpful conduit for residential projects, and while demand continues across the country for housing, Torrington says there’s some interesting times ahead for Kobelco.

“The Kobelco dealer network is the backbone of our success. Our dealers know their regions, they know their markets, and they know their clients. This is how we’re able to partner and sustainably grow. Service should never be a compromise. Since our dealers are independents, they understand that and know that they can expect that of Kobelco, too,” says Torrington.

“The movement of projects around the country and our dealer capability means that there’s great potential for us to keep growing over the next few years.”