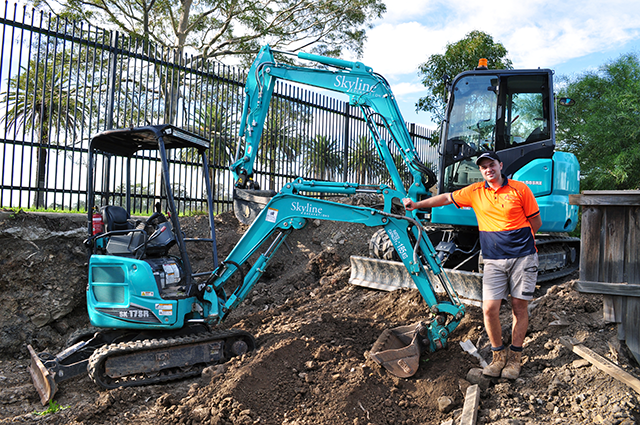 Mini excavators
are widely used on worksites where space is restricted, making them a popular tool for use in residential construction and urban commercial sites, where they are often used for utility installation, landscape construction, material handling and concreting. When working in tight spaces, operators want a small machine that doesn’t compromise on power, has tough durability, and excellent manoeuvrability.

The Kobelco SK17SR is small in size but big on power, combining a compact design and zero tail swing with a top-class digging reach and digging depth, for superior performance. Built in Japan, the SK17SR is known for its quality and rugged durability, meaning its owners can expect years of worry-free operation, and when it’s time for a new one they can expect excellent resale value.

While on the development site of a new childcare centre in Potts Hill, Sydney, the Kobelco team were fortunate enough to have a chat with Marco Ventresca, owner/operator of Skyline Excavations, who was putting an SK17SR to work.

Marco started Skyline Excavations 3 years ago. “After starting out in the landscaping industry as an apprentice at the age of 17, I took some time out for a few years to help my uncle in a food manufacturing business, but it wasn’t long until I knew it wasn’t for me long-term, so I made the decision to go out on my own,” says Marco.

With his many years of experience in the industry, Marco’s decision as to which machine he would purchase to start his business was a very simple one—the Kobelco SK17SR ticked all of the boxes.

“During my time in landscaping, I had jumped on several excavators, trying out many different brands. Most of the mini excavators that I operated seemed very jerky, and not at all stable. I had the opposite experience when using Kobelco excavators—they operated very smoothly, even under heavy loads, which is what you need when working in confined spaces,” explains Marco.

A year or so later, Marco purchased another Kobelco, an SK55SRX, with plans to continue adding to his Kobelco fleet. It isn’t just the superior performance that keeps Marco coming back to Kobelco, “it really is a great community, and anyone who owns a Kobelco is a part of it. I would definitely recommend Kobelco to others.” 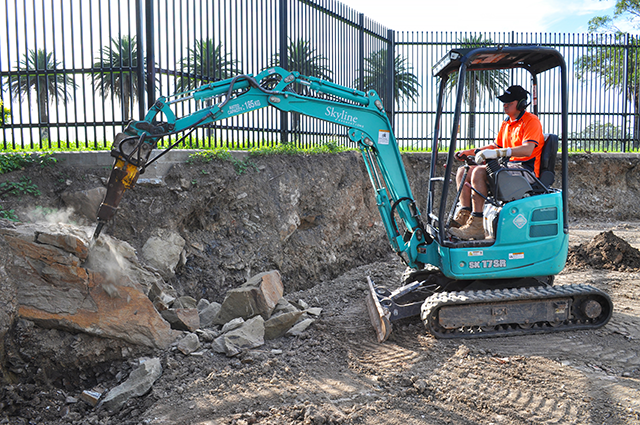