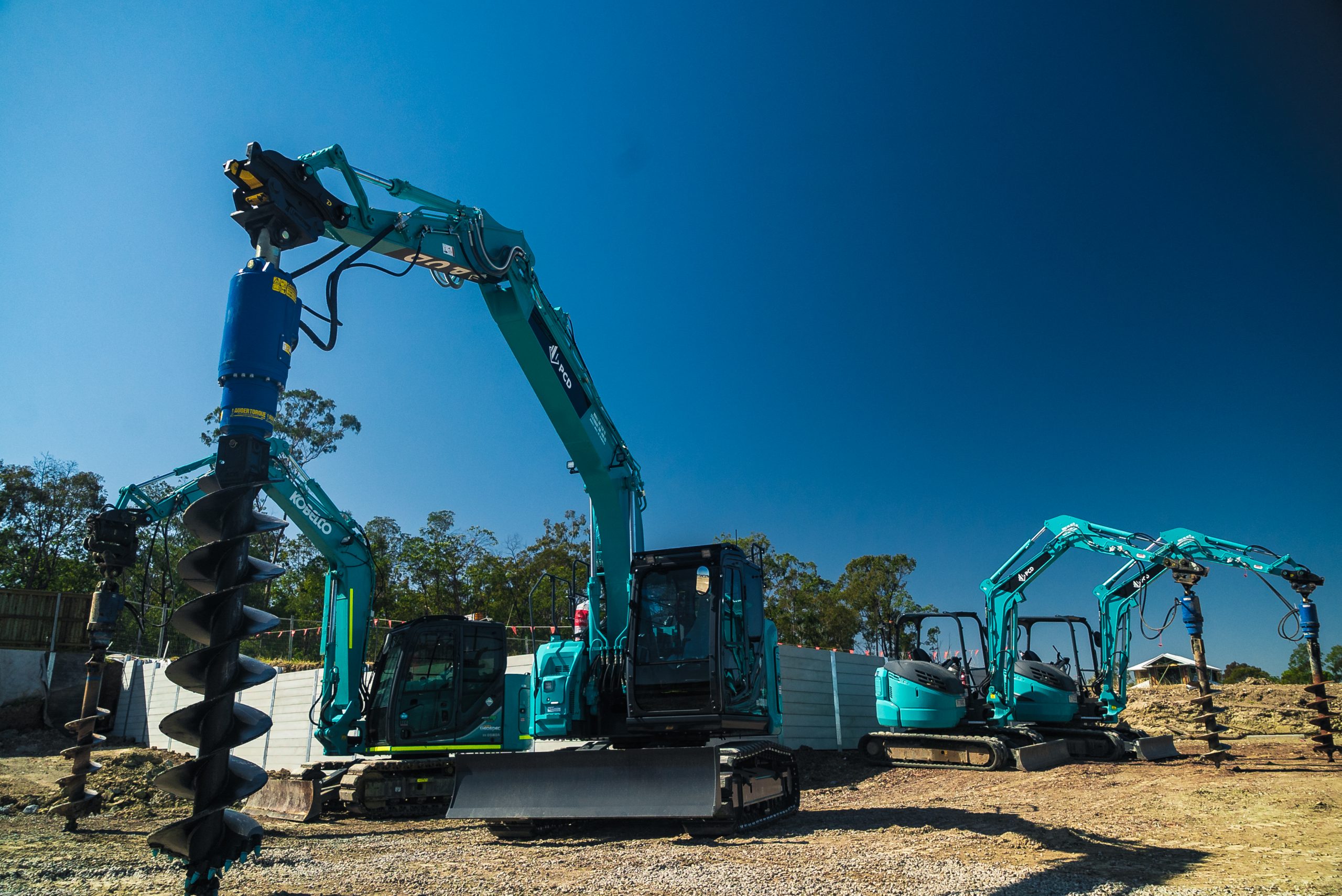 ZANE DWYER MAKES HIS OWN LUCK, WITH A LITTLE HELP FROM KOBELCO

It sounds like something out of a movie; a bloke wakes up one morning and finds he’s suddenly a director of a multi-million-dollar business.

Yet, that’s just what happened to Zane Dwyer of Prime Concrete Developments (PCD).

Of course, this was an overnight success story some 8 years in the making. Zane started out as a residential landscaper, specialising in timber fences for builders. A few years in, however, a bad experience left a bitter taste in his mouth. “I was making good money and getting ahead in life. Then I had a builder go bankrupt on me,” he recalls. “I lost around 50k. So, I just didn’t trust builders anymore.”

It was a Komatsu PC45 that got Zane started, but once he got to a point where he was looking to expand his fleet, it was Kobelco that caught his eye. “I went to the BrisVegas office to look at an 8-ton machine because I wanted to start taking the drilling side a bit more seriously. That’s where I met Marco.”

Marco, a sales rep with BrisVegas Machinery in Brisbane, had previously worked with attachment specialists, Auger Torque, so he knew the exact setup Zane was chasing. “Funnily enough, Marco’s not actually my area’s designated sales rep,” he recalls. “But he was in the office that day and we got talking. He’d set up some of the biggest retaining wall companies in Brisbane and it was his confidence that sold me. So, that was the start of me buying Kobelco.”

Part of Zane’s unique setup is custom-made augers procured from one of the Brisbane earthmoving scene’s best kept secrets. “Albert Micallef runs ACM Auger. He has the best augers in Brissie,” says Zane. “Auger Torque were pretty impressed by this auger. They know Albert well, because he’s one of their re-sellers. But, yeah, I was blown away by the quality. He just works out of a small shed at his house, producing these top-quality augers.”

Zane discovered ACM Auger through old-fashioned word-of-mouth. “I just happened to hire a contractor – Medwick Drilling,” he says. “Albert used to be their fabricator, doing all the repairs on their auger equipment, but then he went out on his own. One of the operators said if I was looking for serious rock drilling equipment, I should get in touch.”

The Kobelco machines are certainly Zane’s pick for performance, but the street appeal was also a big drawcard. “Everybody comments on how nice our fleet looks. It does look good when you rock up and everything looks uniform,” he explains. “In a sea of yellow and orange, it’s good to see that color pop on site. You can spot your machine a mile away, which is awesome.”

Presentation is something Zane feels is an important part of maintaining his brand and good reputation.

“I’ve always tried to have very good presentation, including wearing branded T-shirts,” he shares. “It makes you look professional to not have people rocking up in board shorts, so we try to have everyone in uniform. They feel good to be a part of the brand because there’s a lot of talk about us at the moment, which is really good to see.”

In fact, it was this good reputation that changed Zane’s business (and life) literally overnight. “A material supplier, Prime Concrete Developments, approached me, asking if I’d be interested in merging my company with theirs,” he explains. “In Brisbane, it hadn’t really been done before.

You’ll sometimes see an installer try to take on manufacturing or vice versa. But they have nothing but headaches or defects – they end up with a bad name.”

Originally, the two businesses had been trying to work out how to combine efforts as separate entities, but the logistics were making life difficult for them. “It was just getting really messy. So, we went out to dinner and they asked if I’d consider a deal where they’d buy up all my equipment, I’d keep a percentage of my business and they’d make me a director of Prime Concrete Developments,” Zane shares. “I went home had a think about it. But I knew I’d never get another chance like this. Becoming part of a multi-million-dollar company pretty much instantly is a golden opportunity. And it’s worked out really well. It’s good being able to share some of the stresses of business with two other business owners.”

In order to service this new operation, the fleet has grown substantially over the past six months. “We went from owning two excavators to six,” Zane says. “So, we started off with the SK85-7. Then, at the start of the year, we bought an SK25. Then more recently, we went out for lunch with Marco and purchased two SK45s and a SK135-7.”

Zane says the business will look at purchasing one more machine this year. My business partner wanted to go bigger, but I don’t think we’re ready for a 20-tonner just yet. I’d love to have one, but I think it would be more practical having another 5 or 8-tonner.”

Indeed, Zane had been tossing up between Kobelco and Sumitomo, but it was Marco’s expertise that decided the sale. “From my research, the Kobelcos and the Sumitomos have the best flow rate for the auxilliary attachments we use,” he says. “But going to Sumitomo, I wouldn’t have been able to purchase Marco’s knowledge as well. So, it was a complete package deal for me – to have someone that has done all the guinea pig testing with oversized auger motors on smaller equipment.”

The SK85 and the SK45 are the machines Zane reckons he turns to the most. “For retaining wall building, the 5-tonner is a very quick and nimble machine. And it’s still got decent drilling capacity,” he says. “The 8-tonner is a little bulkier, but it’s an absolute weapon for drilling out holes really fast.”

With bigger jobs coming their way, the business is keen to have the SK135-7 on board. “As we’ve been getting a reputation out there, we’ve been getting a lot of extreme engineered walls,” Zane says. “I just completed one recently that was 5m high. I did it with a Kobelco 135 from Ready Plant Hire. The steel posts we were dealing with were 10m and 180kg – the 14-tonner did it effortlessly. So, after hiring that machine, I already had the 135 on order but I knew I made the right choice.”

BrisVegas also handle the maintenance on all Prime Concrete Developments’ machines. “I’m not mechanically-minded and I find it a lot easier,” Zane laughs. “If Kobelco mechanics are looking after Kobelco machines, they’re going to know the ins and outs of them, as opposed to a freelancer that will just slap it together. And, full credit to the BrisVegas team, every time we’ve had a small breakdown or the machine doesn’t sound right, the longest I’ve waited is three hours – which is unbelievable with some of the areas that we’ve be working in. Anyone can give you a new machine, but it’s the service that really counts.”

A great all-rounder machine, Zane says the Kobelcos are also his pick for running specialised auxiliary attachments. “They’re more than capable of powering those devices without having to make too many modifications,” he says. “But also, if you are just doing bulk outs, they’re still very well-balanced.”

Marco has been causing a bit of a stir with his custom setups. So much so, the guys from Auger Torque were keen to see exactly how he goes about it. “I’m running a 35-ton overdrive on a 13-tonner,” Zane explains. “They came out because they wanted to see how it performed and find out how Marco did his calculations. It ran perfect.”

Zane says he’s also running a 15-ton auger drive on the 8-tonner. “That’s a really well-balanced auger drive. It’s not the fastest, but we can get through any rock we’ve encountered quite steadily without the auger drive stalling. And then we’ve got oversized augers on the 5-tonner as well.”

Ever since his first excavator, Zane says he’s only ever purchased Auger Torque equipment. “I’ve heard, time after time that they’ve got the strongest gearboxes in the industry,” he says. “The single shaft has fewer moving parts for the gearbox to shatter. And, because we run the oversize auger drives for drilling heavier ground types, we need that gear box to be able to handle anything we throw at it.”

In terms of hitches, Zane rates the Doherty quick hitches. “I’ve got interchangeable hitches, so within my own inventory of auger drives, I can swap over between the different machines,” he says. “Some other brands I’ve used in the past had a three-part locking mechanism or they jam up and it can be quite frustrating. The Dohertys are so much simpler. They’re also really strong.”

It’s not just the fleet that’s grown at full speed; Zane now has a full team of operators to manage. “In December last year we had around four guys on. Now we’re about 15 people, plus a project management team,” he says. “Even aside from having the funding of PCD, we’re also a complete package now, being a supplier installer. People are taking us a lot more seriously.”

That’s definitely apparent in the types of jobs that are coming their way. “Currently we’ve got around nine subdivision projects ranging from a 400 square meter retaining wall project up to 1800 squares at the moment,” Zane shares. “That’s a big difference from what I was doing four years ago – working with builders.”

To get the work, Zane isn’t shy about doing some good old fashioned cold calling. “Yeah, I just ring up and harass them,” he laughs. “I see their walls and I’m like ‘Surely, you’re not happy with your current installers. Give me one of your smaller projects and see how we do’. I did the same when I was doing builders work. I’d see a Metricon car driving by in the housing estate we were working in and I’d pull them over in the middle of the street and give them the business card. I’ve just never been scared of chasing work. It’s not going to come to you unless you chase it.”

In terms of the future, Prime Concrete Developments is looking to keep growing their fleet but is considering a unique model when it comes to engaging operators. “We’ve got plenty of installers wanting to jump on board, but they’re scared to make the commitment to owning excavators,” Zane explains. “So, we’re looking at possibly supplying them with the excavators. That way we can keep growing the team but we’re not having to manage more employees. Then we’ll also have contractors working for us as well.”

Zane and his partners have also been tossing around the idea of becoming a civil contractor.

“Doing retaining walls, we’ve got all the same equipment subdivision civil contractors do,” Zane says. “It would be good to be able to do our own projects from start to finish and not have to worry about tendering for projects. We could just go in and do a job without as much stress and fuss.”

As a director of a company with big plans, the thing that really keeps Zane going is time with his family. Weekends see him heading to the beach at Coolangatta or tucking into an ‘Eggs Benny’ café breakfast.

“The beach there is our go-to happy place whenever we have time free,” he shares. “I’ve got a two-year-old and a six-year-old. Hopefully they’ll continue the family business or it’ll help them get into a career they want. It means a lot to be able to give them a good education.”

One thing they’ll certainly pick up from their old man is when you work hard and aren’t afraid to go after what you want in life, you just never know what opportunities might come a-knocking. Then all you need is the courage to answer when it does.