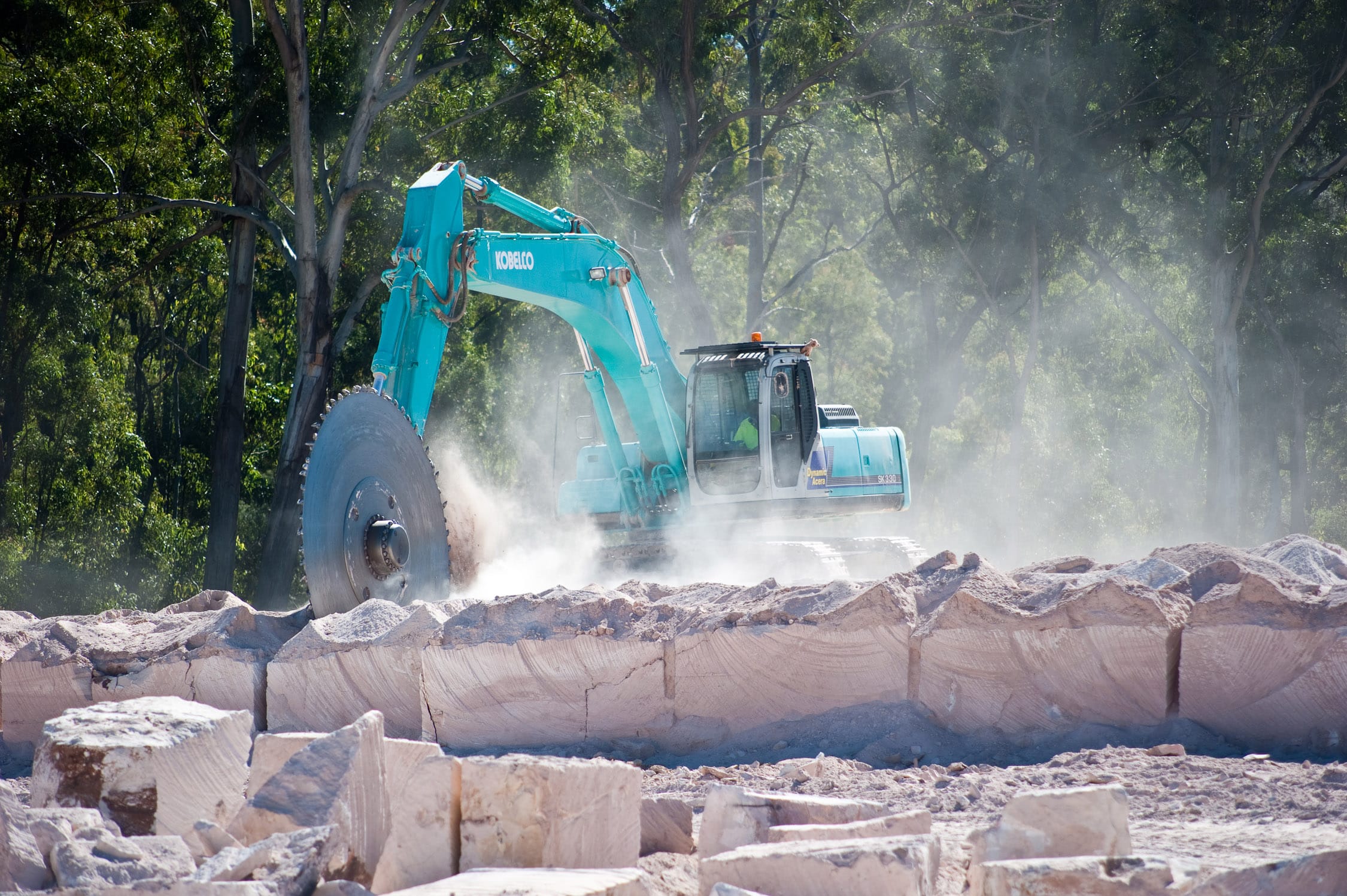 A Queensland sandstone company’s decision to buy eight Kobelco excavators in the past 18 months is paying big dividends with its rapid expansion into China.

Scotbar Proprietary Limited, trading as Rock Trade Industries, is ramping up its Waterfall Quarries operation in Helidon,100 kilometres west of Brisbane, as the company prepares to cope with increase sandstone demand in domestic and global markets.

Kobelco excavators will play a major role in the success of the sandstone venture, according to Scotbar’s Site Senior Executive Allan Payne.

"Waterfall Quarries was a pre-existing operation in poor condition when we took over two years ago. We had to make the quarry more efficient and one of the ways we’ve done this is by looking at the equipment we use. Our Kobelco excavators are a big part of our plans to make this quarry more profitable," said Allan.

"We did a lot of research and we’ve tested a lot of different machines. The Kobelco excavators always had the edge over their competitors. We picked up a Kobelco SK250-8 excavator 18 months ago and we now have eight Kobelco machines, all purchased from our local Kobelco dealership, Chesterfield Australia."

The quarry site has three Kobelco SK135SR excavators, four Kobelco SK350LC-8s and a SK250-8. It also has six other excavators, but as sandstone output increases at the quarry, Scotbar plans to standardise its fleet with Kobelco excavators.

Scotbar has major expansion plans and is working on innovative sandstone recovery methods that it expects will increase its productivity eightfold within the next six years.

"Traditional recovery rates in sandstone mining and quarrying are quite low, we try to use all of the sandstone material and are looking at producing 100,000 tonnes a year in different sandstone products by 2016," said Allan.

"In the next three to five years we’ll need 18 machines. Kobelco excavators have a far better capacity to adapt to this type of quarry work compared to any other brands we’ve tried. Quarry work is extremely hard and it sorts out the equipment that can handle it very quickly. The machines do a ‘real’ hour of work every hour.

"The Kobelco excavators have not faulted. Every morning they get a pre-start check, then you turn the key and off you go. Some other machines we’ve tried aren’t so robustly built and have had cracked and broken booms."

Allan says the Kobelco excavators have also proven to be incredibly productive.

"The sheer power the Kobelco excavators create from the dual flow hydraulics has certainly impressed us.

"The Kobelco SK135SRs are 35 percent more productive for us, and five tonnes lighter than other brands we’ve tried with the same rock-grab attachment.

"In lineal metres we’ve increased production between 25 and 30 percent across the board that’s for bulking out, virgin ground and sawing. Kobelco excavators have exceeded all of our expectations.

"We’ve got 16 operators working at the quarry and they all prefer to use the Kobelco excavators because they know they’ll meet their quotas using them."

Allan said Scotbar had managed to make large fuel cost savings thanks to the efficiency of the Kobelco excavators.

"The SK350LC-8 uses 19 litres an hour less in fuel. The Kobelco is virtually paying for itself in fuel savings. When you’re working the machines 10 hours a day, the fuel savings are just enormous," he said.

"For one specific job the Kobelco SK135SRs are doing, we had been expecting to spend 200 litres of fuel each day per machine using 20 tonners in another brand we’d tried, but with the SK135SRs we’re only using 85 litres a day. We thought we’d have to use the 20 tonners, but the 14-tonne SK135SR could do the same job. They’re miles better.

"Kobelco excavators have been the best value for money and good, reliable machines. They’ll certainly be part of our future," said Allan.

Scotbar has been exporting dimensional sandstone to for the past 18 months and the company has also had interest in its product from and .

Its sandstone is sold in large blocks to the overseas market that’s then cut down for building tiles and statues. Within , sandstone is sold by Scotbar Pty Ltd as boulders, gravel, road base, garden edging and steps. Dimensional sandstone blocks are also sold locally.

"Our overseas and domestic markets work hand in hand, we are very conscious to use all the sandstone we mine," Allan said.