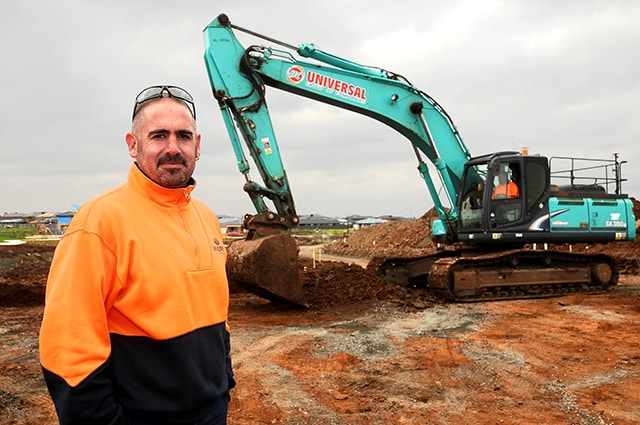 Growing up in the family business, construction has always been a part of Andrew Sirianni’s life. An entrepreneur at heart, Andrew achieved his degree in civil engineering and then took the time to explore the state of the development market before returning to the Sirianni owned and run Universal Group of Companies to become Managing Director.

Universal began as a construction business but has expanded to an extent that at thirty-eight, Andrew is overseeing what is now a group of entities across three key divisions: civil construction, utilities and development.

While the business expands, Andrew is focussed on the core principles which have enabled Universal’s success: a commitment to quality, safety, innovation and customer satisfaction. ‘When something has been with you since you were a child,’ Andrew says, ‘ensuring the success of the company becomes human nature.’

As a young entrepreneur, Andrew understands the importance of selecting a reliable and consistent supplier; so as Universal grows, so too does its fleet of excavators in line with a partnership with Kobelco Construction Machinery Australia.

Universal began purchasing Kobelco excavators in 2000 and its record for quality, safety and innovation was a natural fit for Universal.

‘We kept coming back to Kobelco,’ Andrew says, ‘the reliability and functionality was making them stand above the rest for us time after time.’

As a result of Kobelco’s reliability, not only do Universal operators enjoy using the machines, they are recommended for their comfort and limited downtime.

‘Kobelco excavators are designed with the customer in mind and have over 85 years of experience and expertise behind them,’ says Kobelco’s General Manager of Sales & Service, Doug McQuinn.

‘What makes Kobelco a market leader is that the performance speaks for itself – there’s less downtime for servicing because they are well designed and constructed.’

The recently released Kobelco SK Series – Generation 10 has amplified those benefits once again.

‘With the new Kobelco Gen 10s you’re looking at even more efficiency – all of the standard servicing, aside from checking engine oil, can now be achieved from the ground level,’ Doug says.

The partnership with Kobelco through Victorian Kobelco dealer Melbourne Tractors has amplified Universal’s productivity, since the Kobelco excavators are always on-the-go and are able to perform consistently and reliably through trenching, rock breaking and a whole range of excavation tasks.

Meanwhile, Andrew is persistent in his aim for continual growth and expansion, both at a personal level and as a business director. Universal is an impressive business case study – a testament to Andrew and the Sirianni family’s entrepreneurialism. Since Universal’s values and standards match Kobelco’s, the partnership is a natural fit.