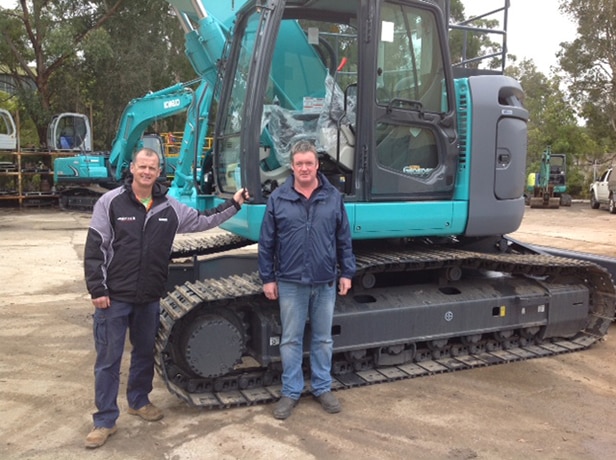 The two issues Mick addressed were:
1. Use of hands-free UHF radio operated from a button on the levers, reducing time taking hands off the lever to use the radio.
2. Use of a power line detector on his machine which activates if within a given distance of power lines.
Mick approached his local authorised Kobelco Dealer, Gato Sales to have both the hands free UHF kits and power line detection units fitted to his recent Kobelco SK250-8 purchase prior to delivery.
“Kobelco’s reliability, fuel economy and great backup and service are second to none. It’s great to know that if there is ever an issue I can get access to parts and service to get the machine back to work quickly. The class leading fuel economy also helps my bottom line,” says Mick.
Director of Gato Sales Chad Vadnjal says, “Mick has always taken a proactive and detailed approach to how his machines go out to work, and we were not surprised that he came to us with the idea for his work on the Thiess site.”
“Having a hands free UHF not only reduces the time an operators hands are off the controls of the machine but also reduces the risk of an accident occurring and allows the operator to work more efficiently reducing costs and increasing productivity. The power line detector reduces the risk of costly damages and workplace injury by alerting the operator when in close proximity to nearby power lines,” adds Chad.
Both the hands free UHF kits and Power Line Detection units are available at Gato Sales. Installation is also available as an option if required.
Mick says, “We have built a strong relationship with Gato Sales over the past seven years. Knowing I have great backup and support makes it easier for me to focus on other important parts of the business. Gato Sales has continually shown that they are able to meet the service delivery demands our industry requires.”
The two safety issues addressed by Mick are key indicators on any jobsite and it has helped their business create a safer work environment for its operators as well as maximising their profitability.
Mick also filmed these two improvements and allowed Thiess to show this at the Contractors meeting thus sharing the knowledge with others.
As a result Mick won a $1,000 Visa Gift Card for the, everyone safe everyday Construction Stream Individual Award.