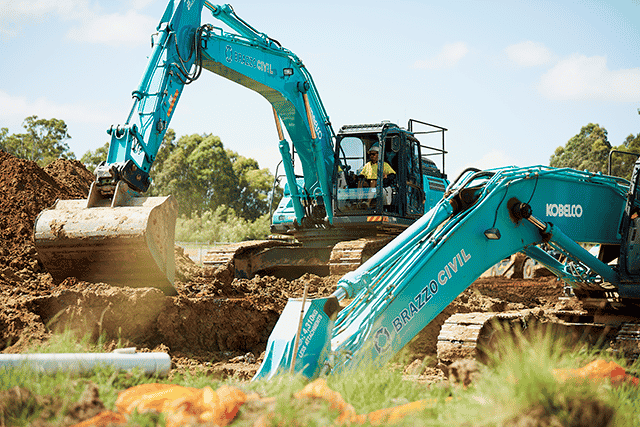 It’s been a hectic six years for Mark Brassington, Director of Brazzo Civil, after stepping away from his previous employer back in 2015. He has not just been building his business but also his family, with his wife and four young children. Having the drive to back himself has been a great move, and it was only a matter of months before his Dad and brother came to work with Mark at Brazzo Civil.

Specialising in installing sewer, water and stormwater assets, Mark and his team of 10 have their focus squarely aimed at completing high quality, productive jobs. With his fleet of Kobelcos, ranging from five tonne to 35 tonne machines at his disposal and his wife (who manages the office), there is a great depth of talent to this impressive outfit.

Mark learnt his skills behind the controls from his Dad at an early age (who was also a Kobelco man), so it is no surprise Brazzo Civil is a family orientated, entirely Kobelco driven operation.

As we arrived on-site at the Brazzo Civil’s new Menangle Stage 1 and Stage 2 projects, the three Kobelco excavators looked an impressive sight as they worked side by side whilst laying pipe and installing stormwater assets. The blue paintwork looked impressive and the machines stood out against the red, brown and earth colours of the ground where they worked—digging, lifting, filling, and trenching. The machines and operators worked in and around each other with precision and purpose.

When asking Mark about his strong preference for the blue machines, he said with enthusiasm, “the new 30 tonne machine offers better operator comfort, which our crew appreciate, from the supportive, comfortable chair to the climate control and well-positioned controls. The operation is powerful, precise, and smooth, and the machines are a big hit with our operators.”

“The temperature range in Sydney’s Western regions is huge, from 40 plus degrees in summer to less than 10 degrees on early winter mornings. Our operators remain comfortable and can focus on the tasks at hand in all conditions. Along with a new design which allows better visibility due to the seating position, and with large glass panels, which all add to safety and make for impressive features. With our work, including shoring, benching, and battering, and with some workers being required to be on foot along with various equipment close to our work area, visibility and safety are paramount. Our operators also found the Kobelco machines quicker and smoother to operate, and more fuel efficient than our earlier machines, which for the bottom line and profit margins etc., is a huge factor.”

Mark continued, “when you start with older machines with a fair few hours on the clock, that have continued to run with minimal or no breakdowns year after year, how could you go past re-investing your hard-earned dollars back into those same brands of machines that have proved themselves as workhorses and done those hard yards.  That along with the ongoing advancements and developments of the Kobelco brand and technologies. How could you go wrong?”

Mark has been a loyal customer of Sydney Trucks and Machinery (STM) and has built a great relationship with his Sales Rep, Adrian. When asking Mark about his experience with Adrian and STM, he shared, “we have bought five machines off STM over the last six years. Adrian is always friendly and easy to deal with. In the past, when purchasing new machines, we have had some specific turnarounds and delivery dates we needed to be met. STM has always got the machine out to us in such a short turnaround, and our latest new machine was out of the workshop in six days. STM also does all our servicing, and they are swift to act if needed on repairs. Their reliability has been impressive, and above all else, they are effortless to deal with. We also use their in-house finance consultant, Jamie, who is very efficient and always gets us the best deal with a quick turnaround. You’ve got to be happy with that!”

There is no doubt that Mark’s more recent purchases like his SK300LC-10 and SK350LC-10 have both enormously contributed to Brazzo Civil’s muscle to complete significant projects on time. When asking Mark about just how valuable these additions have been, he said, “our most recent purchase was the new SK300LC-10. When we looked around at 30T machines, this machine has very high engine power compared to the rest. While the power and efficiency is very impressive, the icing on the cake is the durability and reliability of the Kobelco machines. It’s this same reliability that keeps us on time and on schedule, day in, day out.”

The Kobelco SK300 delivers a rated power output 185 kW, contributing to its top-class performance. In addition, the machine sports best in class bucket breakout force (208 kN) and tractive force (280 kN). Specialising in sewer, stormwater, and pipework excavation, reach is essential. With a maximum digging depth of 7.2m and digging reach of 10.87m, the versatility of the SK300LC-10 is huge.

Mark’s SK350LC-10 adds even greater muscle and capabilities to the day-to-day operation offering best in class bucket breakout force (244 kN) and tractive force (333 kN) for the more challenging aspects of the process. But essentially, these machines work side by side for optimum progress and having the chance to come onsite and see just how well the Kobelcos (and Mark’s team) work side by side to hit benchmarks and schedules was an impressive sight.

Adrian Martiniello has been with STM for eight years and currently looks after the southern side of Sydney for heavy excavators and has been working with Mark since his first machine purchase, six years ago. Five machines later, they have built a fantastic relationship, and both seen some significant growth and developments in not only Mark’s business but the industry in general. Adrian’s experience and product knowledge has allowed him to give the most up-to-date, current advice and feedback to Mark concerning his purchases to get the absolute best bang for his buck on his Kobelco fleet. 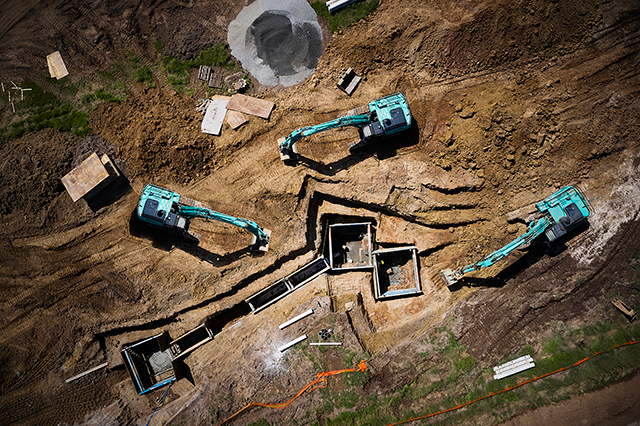