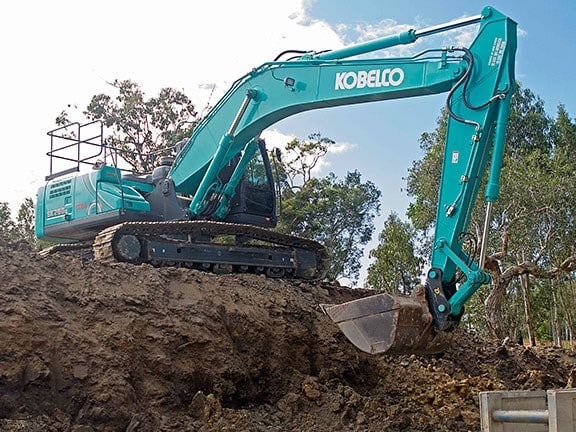 When Mike Coleman and John O’Toole met while travelling more than 30 years ago they never imagined that they, along with Mike’s brother Steve, would start a drainage business and own one of the longest-running Kobelco fleets in Australia.

The trio’s allegiance to the brand has been a strong part of their business history and continues now that they have accepted delivery of the first new Generation 10 Kobelco SK260LC-10 in Australia.

“We’ve been following Kobelco since they first arrived in the country and we bought our first Kobelco 907; they’ve always worked well for us. We recognised the effort and attention-to-detail that has gone into the new Generation 10 machines.

“Each year we replace one machine, so when it came time for this year’s update it was an easy decision,” Mike, says.

The majority of Coleman Drainage’s work is large-scale trenching, infrastructure and subdivision work.

“The nature of the jobs we do means we’re paid by the bucket rather than by the hour so the power and efficiency of the Kobelco SK260LC-10 fits the bill for us. It means we can get more work done in a shorter amount of time and move onto the next job making us more profitable,” Mike says.

Reliability is also a critical factor for the Coleman’s as they opt for a team approach to a job site.

“We’ve been taking this approach for many years and using Kobelcos throughout those years. It’s a winning formula.”

The Coleman drainage fleet ranges from the SK20SR all the way up to the SK480LC-8. With such a large fleet, the team also values fuel efficiency. “It’s easy to lose sight of how much fuel your machines are using with such a large fleet but we’re confident that the Kobelcos operate efficiently whilst maintaining the power we need. The fleet is split between the Brisbane and Sunshine Coast offices in Queensland and looking to the future Mike will be maintaining the business as it stands.

The Coleman team is given strong support by the team at BrisVegas Machinery.

“After the team at BrisVegas became the Queensland Kobelco dealer about a year ago, we have built a solid relationship with them. We received great service when we bought the new Generation 10 Kobelco SK260LC-10 and we look forward to working with them in the future.

“Business is ticking along nicely for us, we’re happy with our volume at the moment and we have very happy clients so we’ll just maintain things the way they are,” Mike says.