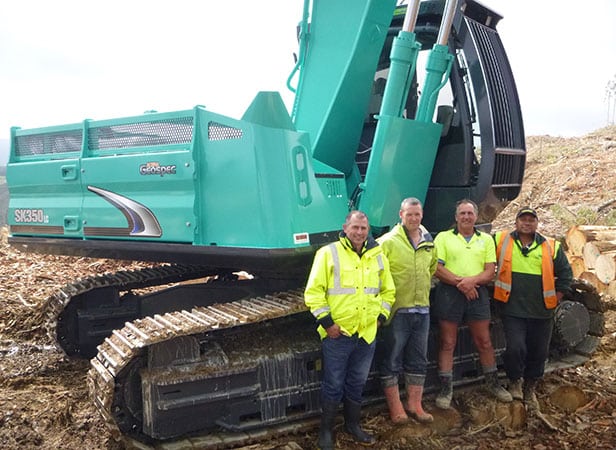 The two Kobelco excavators have gone into service fleeting and loading under yarders operating in the JNL East Coast forests.

JNL chose Kobelco due to the brands long term sound manufacturing qualities, Mimico’s effort to establish, train and provide technical back up for regional servicing as well as their sales and spare parts service.

JNL have been heavily involved in NZ forestry and wood-processing industries for the past 20-years manufacturing advanced and innovative wood products from selectively planted, managed and harvested Radiata Pine for local and export markets.

The company owned crews operate in 30 year old Radiata Pine which averages around 3.5 tonnes per piece. Logs range from 13 metre pruned and unpruned to the JNL mill right down to smaller top logs.

Hauler productivity in the steep terrain varies but the loaders may at times work solo, or in high production situations be assisted by a similar sized back up machine.

The excavator logging build packages from Pricerite in Rotorua are designed to facilitate shovel logging in areas where that is possible.

General Manager of JNL, Sheldon Drummond says, “Whilst there may be several models of excavators that will do the job and last the distance, it’s always the downtime and frustrations of attaining parts and getting it sorted quickly that makes or breaks the operation.”

“Mimico have made a sound commitment to back this time proven brand of excavator and we are partnering that initiative into our business for our own gain.”

Keep an eye out for the full story which will be featured in NZ Logger and Deals on Wheels NZ!